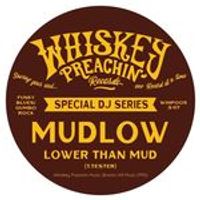 From the recording Lower Than Mud

Whiskey Preachin Records are very pleased to announce the release of “Lower Than
Mud” on 29th October 2021, the first single from the upcoming Mudlow album "Bad
Turn", which will be released in full in February 2022. “Lower Than Mud” is
somewhat of a signature tune for the long-running Brighton-based band, delivering
their dirty blues funk to maximum effect. There's plenty of grit gone into making this
pearl, that’s for sure.

You've got your troubles you're feeling rough, you're going bankrupt too
The repo-man took your pickup truck and left you sitting in your underpants feeling blue
Moved to the city you've got squat
Shaking change in a paper cup
Here's the evening news, Buddy wrap yourself up
Nowhere lower than mud

Wake at night your bed's on fire, tip of a cigarette butt
Run up to the top floor, banging on the fire door
The whole place is boarded up
Razor wire, hogtied, trapped inside a house fire howling like a scolded pup
Some idiot said 'when things get bad then the only way to go is up'
Reach for the ceiling, clinging from the eaves looking for a place to drop
Two broken legs, no Obama healthcare
Nowhere lower than mud